The politics of Drachoctis - TIGA 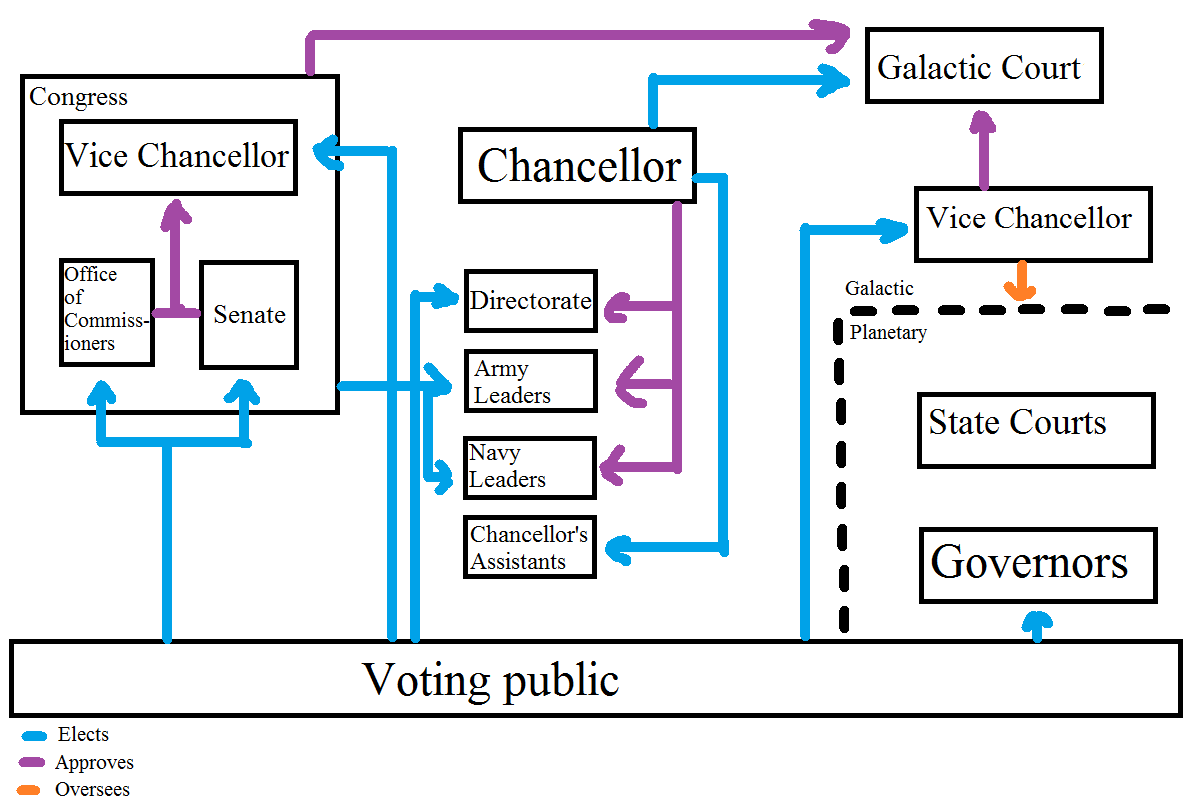 Above is an image that highlights how the TIGA governments work. What follows will be an explanation for each of these items.

Chancellor – The head of state for TIGA. Spends much of their time dealing with both congress and the armed forces. Can directly order war, and take action on laws and decisions with impunity. Elected every 5 years, and can only serve two terms. The current TIGA chancellor is Alfhild Spitsener, a member of the European Labor Coalition.

Congressional Vice Chancellor – The first vice chancellor, who regulates congress, acting on the Chancellor’s wishes. Has little concrete power, though can influence how congress operates, and what bills are passed. They serve 4 year terms, and can only serve 4 terms. There is not currently a congressional vice chancellor, as the congress has been denying every single one that is elected by the public.

(Planetary) Vice Chancellor – The second vice chancellor, who oversees the planetary powers and keeps them in check. Acts much more on their own wishes than on the chancellors, though they must answer to them. Generally spends their time meeting with governors, and making certain they are doing their job right, also has some sway over military matters. They serve 3 year terms, and there is no term limit. Current vice chancellor is Seung Iyer, a member of Asian Conservative Party.

Senate – A group of 42 individuals, 6 from each TIGA Core Planet. Senators are legislators, and thus spend almost all of their time dealing with bills that are passing through. Though they also have especial sway over planetary regulations, and often deal with governors. They serve 4-year terms, and half are up for re-election every two years.

House of Commissioners – 400 individuals, with representation from each planet based on population. Also part of the legislative branch. But commissioners are expected to deal with galactic relations, and thus often speak with leaders from other planets, and races. They serve three-year terms.

(Note: A bill often only has to go through the senate or the house, unless it is challenged by members of the other. There are certain times where this is forbidden from occurring, in both directions.)

Galactic Court – A court of 19 individuals, who decide whether laws run along the TIGA charter. They also have the power to declare actions taken by the chancellor unlawful, though no power to actually stop them. They serve 10 year terms, with no term limit.

Governors – One for each of four districts of a planet. Actual job varies by district, though they generally vote, and draft, district laws, decides what to do with the district’s military forces, and appointing, or approving, various lower district officials. They serve 6-year terms.

State Courts – Should be called planetary courts, and are by most, but the official title is “state court.” They serve as the lower-downs to the galactic court, and rule on laws on their planet, in accordance with their planetary charter. And rule on some prisoner cases, depending on planet. Some have more power, but it is dependent on planet. All are made up of 7 individuals.

The politics of Drachoctis - TIGA

Ascendant campaigns can view previous versions of their pages, see what has changed (and who did it), and even restore old versions. It's like having a rewind button for your campaign.

We've already been saving your edits, so if you upgrade now you will have instant access to your previous versions. Plus, you have our no risk refund guarantee , so there's nothing to lose.

I'm sorry, but we no longer support this web browser. Please upgrade your browser or install Chrome or Firefox to enjoy the full functionality of this site.